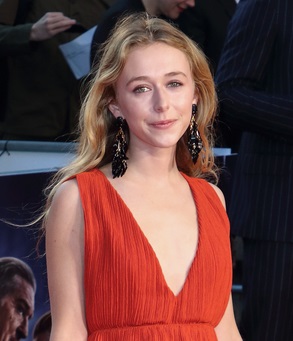 India Ennenga is an American actress. She is the daughter of director and filmmaker Laurie Weltz and George Ennenga. Her father is of English, German, and Frisian descent. The surname Ennenga is Frisian. Her mother is Ashkenazi Jewish.

India’s paternal grandfather was Thomas Ennenga (the son of Oscar Frederick George Ennenga and Cornelia Thomas). India’s grandfather Thomas was born in Illinois. Oscar was the son of Gretus George Ennenga, who was Frisian, from Germany, and of Elizabeth Wagner. Cornelia was the daughter of Abraham Ulysses Thomas and Margaret Curtiss.

India’s paternal grandmother was Ida Louise Curtis (the daughter of Randall Fuller Curtis and Irene Brown). Ida was born in Iowa. Randall was the son of William Sanders Curtis and Ida Frances Fuller.

India’s maternal grandmother was Audrey Askin (the daughter of Arnold Sam Askin and Fannie Ray Halff). Audrey was born in New York. Arnold was the son of Polish Jewish parents, Samuel Askin and Leah Rosenbloom. Fannie’s father, Henry Levi Halff, was the son of a French Jewish/Alsatian Jewish father, from Lauterbourg, Bas-Rhin, Alsace, and of a mother who was born in Texas, to a French Jewish father and to a German Jewish mother, from Dahn, Rhineland-Palatinate. Fannie’s mother, Ray Oppenheimer, was the daughter of German Jewish parents.