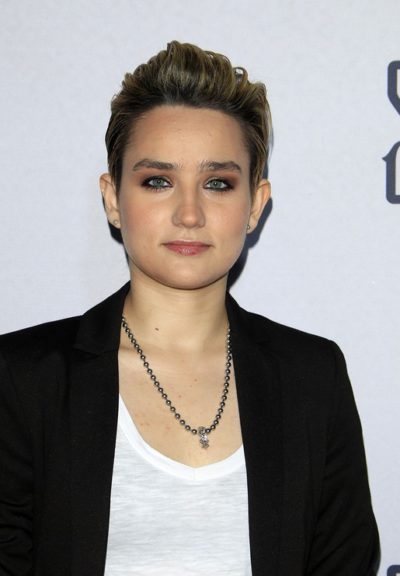 Taylor-Klaus in 2015, photo by kathclick/Bigstock.com

Bex Taylor-Klaus is an American actress. She is from a Jewish family (from Ukraine, Germany, Romania, Latvia, Russia, Poland, and Lithuania). Bex had a Bat Mitzvah ceremony. Bex is married to actress Alicia Sixtos.

I speak a little Spanish and my Hebrew is a little rusty — I can understand better than I speak!

In an interview, Bex seemingly stated that she has Cuban ancestry. However, she was referring to the background of her close friend.

Bex’s paternal grandfather was Richard M. Klaus (the son of Irving Goncer/Gonny Klaus and Ruth Mendel). Richard was born in Pensnylvania. Irving was born in New York, the son of Samuel Solomon Klaus and Mary Goncer, who were from Ostroh, Ukraine. Ruth was born in Pennsylvania, the daughter of Solomon Mendel, who was from Andernach, Rheinland-Pfalz, Germany, and of Bertha Buka, who was born in Ohio, to parents from Germany, her father from Neustadt and her mother from Laupheim.