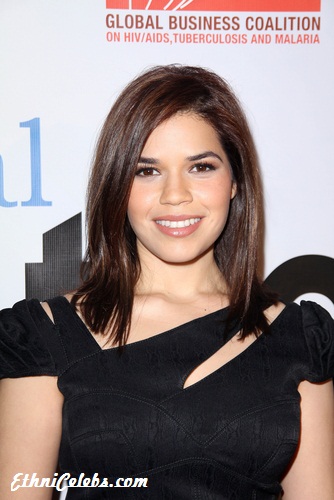 Ferrera in 2011, photo by s_bukley / Shutterstock.com

America Ferrera is an American actress. She is known for starring in the films Real Women Have Curves and The Sisterhood of the Traveling Pants, and as Betty Suarez on the show Ugly Betty.

America is the daughter of América Griselda Ayes and Carlos Gregorio Ferrera Paz, who were from Tegucigalpa, in the Central American nation of Honduras. 90 percent of Hondurans are Mestizo, a mixture of Native American and European. The remainder of the population is made up of Native American, Black and White people. America has stated that she has Lenca ancestry; an Indigenous tribe, native to Honduras.

America is married to actor, writer, and director Ryan Piers Williams, with whom she has two children.

America’s paternal grandfather was Don Carlos Ferrera (the son of General Gregorio Ferrera González and Maria Luisa Padilla). Carlos was born in La Esperanza, Intibucá Department, Honduras. Gregorio was a prominent general and revolutionary in Honduras, and was nicknamed “El Indio.” He was the son of Tiburcio Ferrera and Gregoria González. Maria Luisa was the daughter of an unknown father and Luisa Padilla.

Sources: Information about America’s appearance on Who Do You Think You Are?, 2015 – https://blogs.ancestry.com

Genealogy of America Ferrera (focusing on her father’s side) – https://www.geni.com