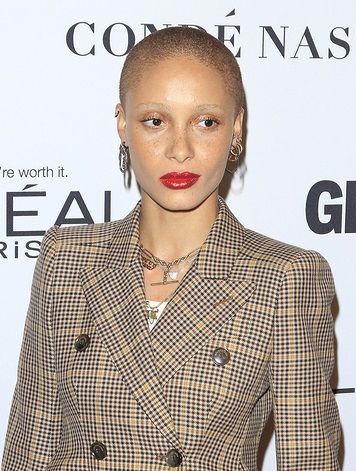 Aboah in 2016, photo by kathclick/Bigstock.com

Adwoa Aboah is a British activist and model.

She was born in Westminster, London, England, to a white English mother, Camilla Lowther, and a Ghanaian father, Charles Aboah. Her sister, Kesewa, is also a model. Her mother is descended from the British nobility, headed by the Earl of Lonsdale.

A picture of Adwoa with her parents can be seen here.

Adwoa’s maternal grandfather was The Hon. Anthony George Lowther (the son of Anthony Edward Lowther, Viscount Lowther, and of Muriel Frances Farrar). Adwoa’s grandfather Anthony was born in St. George Hanover Square, London, England. Adwoa’s great-grandfather Anthony was a courtier and soldier, who was the son of peer Lancelot Edward Lowther, 6th Earl of Lonsdale, and of Gwendoline Sophia Alice Sheffield. Muriel was the daughter of Sir George Herbert Farrar, 1st Baronet, a mining magnate, politician, and soldier, and of Ella Mabel Waylen.

Genealogy of Adwoa’s maternal grandfather, The Hon. Anthony George Lowther (focusing on his father’s side) – https://old.findagrave.com