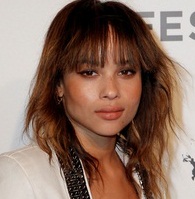 Zoë Kravitz is an American actress, singer, and model. Her roles include Beware the Gonzo, Rough Night, The Batman, and Big Little Lies.

She is the daughter of musician and actor Lenny Kravitz and actress Lisa Bonet.

Her stepfather is actor Jason Momoa. Zoë is related to weatherman and television personality Al Roker. Al has said that Zoë’s paternal great-grandfather and his own paternal grandfather were cousins.

Her half-aunt is musician and singer Kadhja Bonet.

Zoë’s paternal grandfather was Sy Kravitz, a producer (born Seymour Sol Kravitz, the son of Joseph Kravitz and Jean Kaufman). Seymour was born in New York, and was of Russian Jewish descent.

Zoë’s paternal grandmother was Roxie Roker, an actress (Roxie Albertha Roker, the daughter of Albert Roker and Bessie Mitchell). Roxie was born in Florida. Albert was Afro-Bahamian, from Nassau. Bessie was African-American, and was the daughter of Will Mitchell and Julia Tillman.

Zoë’s maternal grandfather was Allen Bonet (the son of Samuel Murry Boney and Mary Orphy). Allen was raised in Texas, and was of African-American, and part Louisiana Creole, descent. Samuel was the son of Albert Boney and Jennie Coatney. Mary was the daughter of Victor Orphy/Orphe and Eloise/Elloise Eugene.

Zoë’s matrilineal line can be traced to Sophie Grossman, who was born, c. 1865, in Siroca.