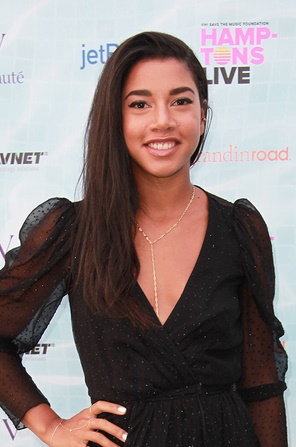 Bronfman in 2015, photo by Prphotos.com

Hannah Bronfman is an American DJ, model, and entrepreneur.

Her father, Edgar Bronfman, Jr., is a businessman who was previously the CEO of Warner Music Group. Her mother, Sherri Brewer, is an actress who appeared in Shaft (1971). Hannah’s brother is entrepreneur and musician Benjamin Bronfman, who founded the Green Owl record label (Benjamin has a son with his former partner, musician M.I.A.).

Her father is Jewish (of Russian Jewish, Ukrainian Jewish, German Jewish, and English Jewish descent). Her mother is African-American. Some of Hannah’s father’s ancestors have lived in the United States since the 1700s.

Hannah is married to DJ Brendan Fallis, with whom she has a son.

Hannah’s paternal grandmother was Ann Margaret Loeb (the daughter of John Langeloth Loeb, Sr. and Frances Lehman). Ann was born in New York. Ann’s brother, John L. Loeb, Jr., was a U.S. Ambassador to Denmark (from 1981 to 1983) and a Delegate to the United Nations (in 1984). Hannah’s great-grandfather John was the son of Carl Morris Loeb, Sr., a Jewish emigrant from Frankfurt, Darmstadt, Hesse, and of Adeline Moses, who was born in Alabama, of German Jewish and English Jewish descent, from a family that has lived in the United States since the 1700s. John and Carl Loeb were founders of the Wall Street brokerage firm Loeb, Rhoades & Co.

Sources: Genealogy of Hannah Bronfman (focusing on her father’s side) – http://www.geni.com