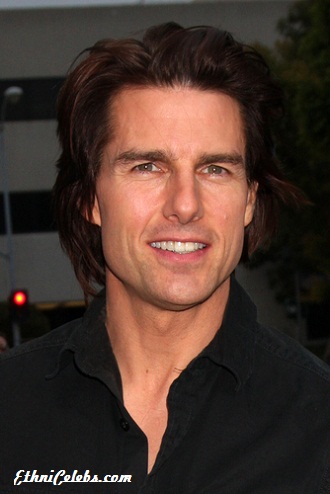 Tom Cruise is an American actor and filmmaker.

Tom is the son of Mary Lee (Pfeiffer) and Thomas Cruise Mapother. Tom’s father was of one quarter Irish, one half German, and one quarter that was of mixed English and Welsh, ancestry. Tom’s mother was of three eighths German and five eighths Irish ancestry. All four of Tom’s grandparents were born in Kentucky, as were all eight of Tom’s great-grandparents. The English and Welsh lines of Tom’s ancestry go back to Colonial American times.

Tom’s great-great-grandmother, Mary Cruise, married twice. Her first husband was Dillon Henry Mapother, by whom she had six children. After Dillon’s death, she remarried to Thomas O’Mara. Their son, who was born as Thomas O’Mara, was listed under that name in the 1880 Census. His name was later changed to Thomas Cruise Mapother. The reason(s) for him changing his name are not clear.

Tom’s maternal grandfather was Charles Conrad Pfeiffer (the son of Lee Norbert Pfeiffer and Anna/Annie M. Shea). Charles was born in Kentucky. Lee was the son of Charles Conrad Pfeiffer, whose parents were from Cölbe, Giessen, Hesse, Germany; and of Mary Roselle/Rosselle Hawkins, who was of Irish ancestry. Anna was the daughter of Dennis Shea and Mary Brown, who were Irish immigrants.

Tom’s maternal grandmother was Comala Rosella Ramser (the daughter of Joseph Charles Ramser and Susan/Sarah A. Mackey). Comala was born in Kentucky. Joseph was the son of George Ramser, a German emigrant, from Alsatia, and of Catherine Merkel, who was of German descent. Susan was the daughter of Gerald Jeremiah Mackey, an Irish immigrant, and of Bridget Quinn, who was of Irish ancestry. Cruise with then-wife Mimi Rogers in 1989,

Other resources about Tom’s family – http://i.usatoday.net