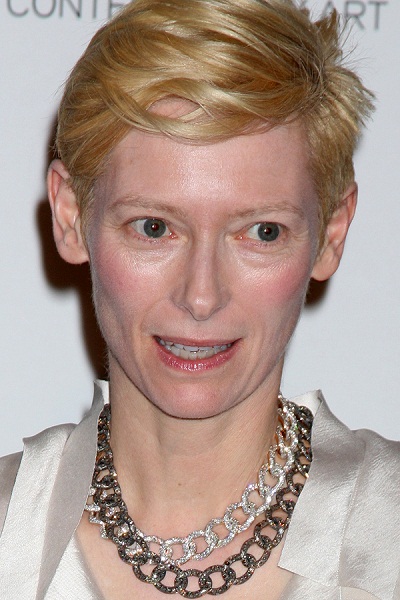 Swinton in 2012, photo by kathclick/Bigstock

Tilda’s father, Major-General Sir John Swinton, was British, and had Scottish, English, and Northern Irish ancestry. Her mother, Judith Balfour, Lady Swinton (née Killen), was Australian, and also was of Northern Irish, Scottish, and English ancestry. Tilda’s paternal great-grandfather was Scottish politician and officer-of-arms George Swinton, and Tilda’s maternal great-great-grandfather was Scottish botanist John Hutton Balfour. The Swinton family is an ancient Anglo-Scots family that can trace its lineage to the Middle Ages. They are said to be one of three British Isles families that can trace their unbroken land ownership and lineage to before the Norman Conquest. Tilda has also been credited as Lutz Ebersdorf.

Tilda’s maternal grandfather was Harold Charles Killen (the son of William Wilson Killen and Marion Young). Harold was born in Prahran, Victoria, Australia. William was the son of Edward Killen, from Ireland, and of Isabella Wilson, from Donegal, Ireland. Marion was the daughter of Charles Young, from Antrim, Ireland, and of Annabella Annie/Anne Lyle, from Down, Ireland.

Tilda’s maternal grandmother was Marion Spottiswood Balfour (the daughter of William Andrew Francis Balfour and Mabel/Mabelle Alice Truman). Marion was born in Hoiles Cottages, Colinton, Edinburgh, Scotland. William was the son of John Hutton Balfour, a prominent botanist, and of Marion Spottiswood/Spotiswood Bayley, both from Midlothian, Scotland. Mabel was the daughter of Isaac Hogan/Hodges Truman, from Nottingham, Nottinghamshire, England, and of Mary Ann Musson, from Bedfordshire, England.

Genealogy of Tilda Swinton (focusing on her father’s side) – http://worldconnect.rootsweb.ancestry.com

Genealogy of Tilda Swinton (focusing on her mother’s side) – http://www.red1st.com