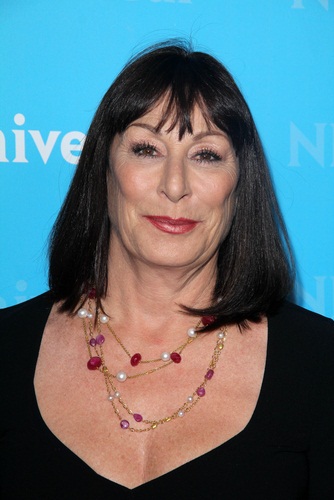 Huston in 2012, image via s_bukley / Shutterstock.com

Anjelica Huston is an American actress, director, and model. She won the Academy Award for Best Supporting Actress for Prizzi’s Honor (1985).

She is the daughter of film director John Huston and socialite, model, and prima-ballerina Enrica Georgia “Ricki” Soma, and the granddaughter of actor and filmmaker Walter Huston. Her half-siblings are actor Danny Huston and writer and editor Allegra Huston. Her nephew is actor Jack Huston. Anjelica was married to sculptor Robert Graham, until his death.

Anjelica’s maternal grandparents emigrated from Italy together, and were from Ispra, Lombardy, in Northern Italy. Anjelica’s father had Scots-Irish/Northern Irish, Scottish, English, distant German, as well as remote Portuguese, ancestry. Anjelica is of 1/1024 Portuguese ancestry, through her descent from a Portuguese immigrant named Domingo Madeiras/Madeiros.

Angelica’s father also had Irish citizenship, and she spent part of her childhood in Ireland, specifically in Craughwell, County Galway. She attended school at Kylemore Abbey.

A DNA test whose results were displayed on the show Finding Your Roots with Henry Louis Gates, Jr. (2019) stated that Anjelica’s genetic ancestry consists of:

Genetically, she was found to have a common ancestor with comedian Larry David and politician Bernie Sanders, likely through shared Ashkenazi DNA.

Anjelica’s paternal grandfather was Walter Huston (Walter Thomas Huston, an actor, the son of Robert Moore Houghston and Elizabeth McGibbon). Walter was born in Toronto, York, Ontario, Canada, and was an Oscar-winning actor, as well as a singer. Robert was the son of Alexander Huston, who was born in Tobermore, County Derry, Ireland, and of Margaret Moore, from County Armagh, Ireland. Elizabeth had Scottish ancestry, and was the daughter of Donald Dugald/Dougald McGibbon and Mary Stewart.

Anjelica’s maternal grandfather was Antonio/Anthony Angelo “Tony” Soma (the son of Filippo Soma and Giusippina Inzaghi). Tony was born in Ispra, and was a restaurateur in New York.

Anjelica’s maternal grandmother was Anjelica/Angelina Fantoni (the daughter of Andrew J. Fantonie and Henrietta Binda). Anjelica was born in Ispra. Huston in 2005, photo by Popperipopp

Sources: Genealogies of Anjelica Huston (focusing on her father’s side) – http://worldconnect.rootsweb.ancestry.com
http://www.geni.com
http://www.wikitree.com