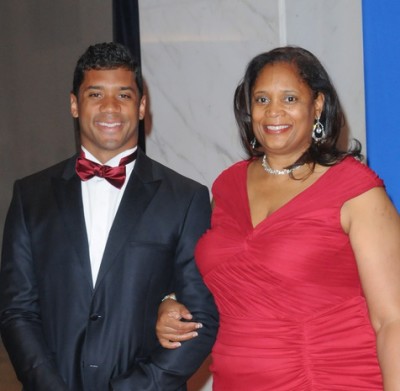 Wilson and his mother Tammy in 2014, photo by Prphotos.com

Russell Wilson is an American professional football player. He is a quarterback for the Seattle Seahawks of the National Football League (NFL).

Russell is the son of Tammy Devar (Turner), a legal nurse consultant, and Harrison Benjamin Wilson III, a lawyer. His parents are both black. Russell is married to singer, songwriter, and actress Ciara, with whom he has two children.

A DNA test taken by Russell stated that his genetic ancestry is:

Russell’s paternal grandfather was Dr. Harrison Benjamin Wilson, Jr. (the son of Harrison Benjamin Wilson, Sr. and Marguerite Ayers). Russell’s grandfather Harrison was born in Amsterdam, New York. He was an educator and college basketball coach, who was president of Norfolk State University, from 1975 to 1997. Russell’s great-grandfather Harrison was the son of John Lyle Wilson, who was born into slavery, and of Martha Ellen Coles. Marguerite was the daughter of Robert Lee Ayers, Jr. and Elizabeth J. Price.

Russell’s maternal grandfather was named A. B. Jackson (Alexander Brooks Jackson). A. B. was a prominent painter. He was born in New Haven, Connecticut, to an American father, who was African-American, and to a mother with English ancestry, in Manchester. Russell did not know that A. B. was his grandfather until he was an adult.

Russell’s maternal grandmother is Carolyn Turner (the daughter of Herman Turner and Flora Ann Douglas). Carolyn was born in Virginia. Herman was the son of Reddick Turner and Jenny Bynum. Flora was the daughter of Mack Duggins Douglas and Carrie Lean Darden.

Sources: Video of Russell having his family history described to him by Henry Louis Gates, Jr. – https://www.youtube.com