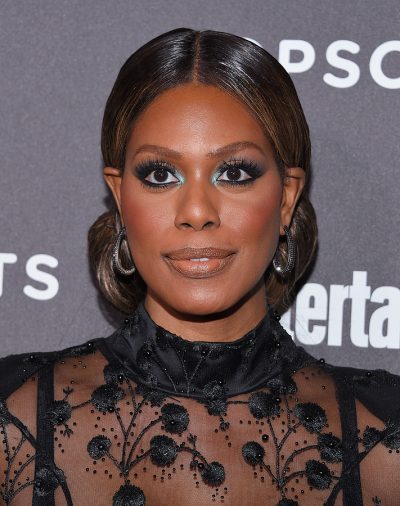 Cox in 2019, photo by DFree/Bigstock.com

Laverne Cox is an American actress and LGBTQ+ advocate. She is the first openly transgender woman to receive a Primetime Emmy nomination in acting, and the first to appear on the cover of Time magazine.

She was raised by her single mother, Gloria Cox, and grandmother. Her twin brother is composer, performer, and artist M Lamar (Reginald Lamar Cox). Laverne grew up in the AME Zion church.

Laverne’s maternal grandfather was J. P. Cox (the son of Henry C. Cox and Ada L. Jackson). J. P. was born in Alabama. Henry was the son of Emmanuel Cox and Ann Scruggs. Ada was the daughter of Calvin Jackson and Tamar Johnson.

Laverne’s maternal grandmother was Emma Jane “Madea” Jones (the daughter of A. C. Jones and Winnie McGuire). Emma was born in Alabama. Winnie was the daughter of George Washington McGuire and Georgianna/Georgiana Banks.

An AncestryDNA test whose results were displayed on the show Who Do You Think You Are? (2018) stated that Laverne’s genetic ancestry is: