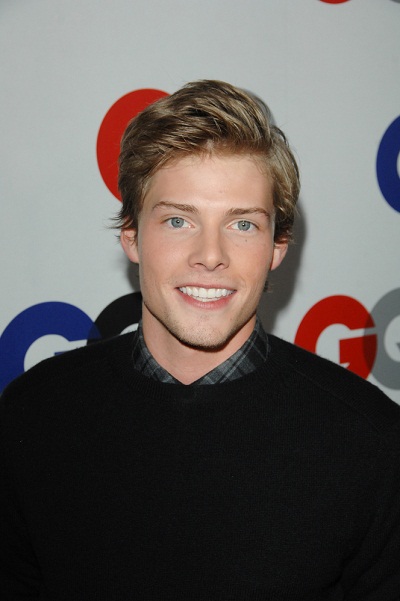 Parrish in 2009, photo by Prphotos

Ethnicity: English, over one eighth German, some Scottish and Scots-Irish/Northern Irish, 1/256th Dutch

Hunter Parrish is an American actor and singer. His roles include the films Steal Me, Freedom Writers, 17 Again, and It’s Complicated, and the show Weeds.

Much of his ancestry is English. He also has over one eighth German, and some Scottish and Scots-Irish/Northern Irish, ancestry. He has 1/256th Dutch roots (at least), through one paternal ancestor, Christofflef Bergen.

Hunter is married to Kathryn Wahl, with whom he has a daughter.

Hunter’s paternal grandfather is Winford Dee Tharp (the son of Chester Dale Tharp and Lucy Deanna/Deana Henderson). Winford was born in Illinois. Chester was the son of William Allen Tharp and Arzella King. Lucy was the daughter of John William Henderson and Nancy Jane Embs.

Hunter’s paternal grandmother is Geraldine Karges (the daughter of Albert Herman Karges and Loretta Dessie Byers). Geraldine was born in Indiana. Albert was of German descent, the son of William Theodore Karges and Sophie Augi Pelz. Loretta was the daughter of Allison Winfred Byers and Falina B. Garrison.

Hunter’s maternal grandmother was Ruth Elizabeth Cox (the daughter of James Lester Cox and Clara Gertrude Meek). Ruth was born in Kansas. James was the son of James Wesley Cox and Alice Deighton. Clara was the daughter of Morganzio McGowin Meek and Henrietta M. Plowman.

Hunter’s matrilineal line can be traced back to Sarah Jane Stabler, who was born, c. 1830, in Baltimore, Maryland.

Genealogy of Hunter’s paternal great-grandfather, Chester Dale Tharp (focusing on his own father’s side) – http://worldconnect.rootsweb.ancestry.com