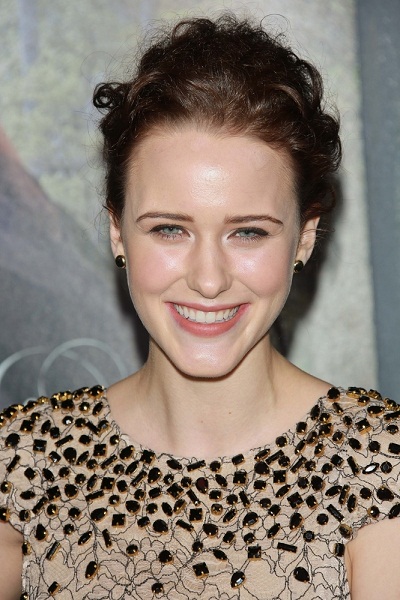 Brosnahan in 2013, photo by Prphotos.com

Rachel Brosnahan is an American actress.

Her father, Earl, is an American, of Irish, and one eighth French, descent. Her mother, Carol, is English. Her aunt (father’s sister) was fashion designer Kate Spade. Rachel is married to actor Jason Ralph.

While Rachel has played several Jewish characters, as in Manhattan, The Dovekeepers, and The Marvelous Mrs. Maisel, she herself is not Jewish.

Rachel’s paternal grandfather is Earl Francis Brosnahan II (the son of Earl Francis Brosnahan and Helen Rose Mottin). Rachel’s grandfather Earl was born in Missouri. Rachel’s great-grandfather Earl was the son of Daniel Thomas Brosnahan and Mary Eleanor/Ellen Conner/Connor, who were born in Missouri, both of them of Irish descent. Helen was the daughter of Leger Nicholas Mottin, who was of French descent, and of Katherine/Catherine Margaret “Munnie” Roache/Roche, whose parents were from Midleton, County Cork, Ireland.

Rachel’s paternal grandmother was June Therese/Theresa Mullen (the daughter of John A. V. Mullen and Theresa/Terese O’Flanigan/O’Flanagan). June was born in Missouri, and was of Irish descent. John was the son of Bernard Mullen and Mary. Theresa was the daughter of Frank O’Flanagan and Mary.

Rachel’s maternal grandmother was Shirley Sumner (the daughter of John Wainwright Sumner and Clarice Hepworth). Shirley was born in Leeds North, Yorkshire, England. John was the son of John Sumner and Ann Elkington. Clarice was the daughter of Harry Hepworth and Martha Rider.

Genealogy of Rachel’s father (focusing on his father’s side) – http://familytreemaker.genealogy.com