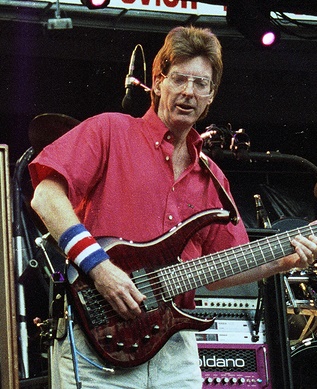 Lesh in 1992, photo by NorthfotoBP/Bigstock.com

Phil Lesh is an American musician and songwriter. He was a member of the rock band Grateful Dead, in which he sung and played the bass. The band’s members also included Jerry Garcia, Bill Kreutzmann, Ron “Pigpen” McKernan, and Bob Weir.

Phil is the son of Barbara Jewel and Frank Hamilton Lesh. Barbara was adopted by her stepfather, Arthur Chapman, and the identity of her biological father is not publicly known. With his wife, Jill, Phil administers the charitable organization the Unbroken Chain Foundation.

Phil’s paternal grandfather was William Bennett Lesh (the son of Daniel Webster Lesh and Flora Sophia Fulkerson). William was born in Ohio. Flora was the daughter of William Shakespeare Fulkerson and Charity Gearhart.