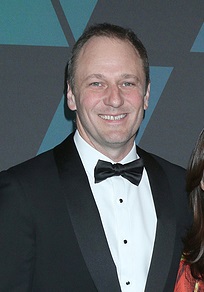 Hay in 2018, photo by kathclick/www.bigstockphoto.com/

Phil Hay is an American screenwriter. His writing partner is Matt Manfredi. They have written movies Ride Along (2014) and The Invitation (2015), among others.

Phil is married to film and television director Karyn Kusama, with whom he has one child.

Phil’s paternal grandfather was Everette E. Hay (the son of Claude Everette Hay and Grace V. Hartle). Everette was born in either Illinois or Indiana. Claude was born in Indiana, the son of William M. Hay and Elizabeth Worman. Grace was born in Illinois, the daughter of Jacob Hartle Jr. and Mary Frances Hendricks.