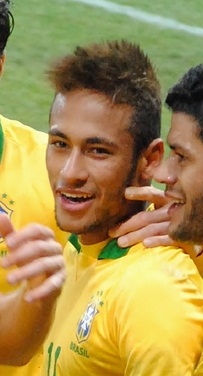 Neymar in 2013, photo by sonia alves/Bigstock.com

Neymar is a Brazilian professional football player and actor. In August 2017, he moved from Barcelona to Paris Saint-Germain in a transaction worth €222 million, making him the world’s most expensive football player ever.

He is the son of Nadine da Silva and Neymar Santos. His parents are of mixed European and African heritage.

Neymar has been the target of alleged racial abuse occasionally throughout his career, and his ethnic identity has provoked much discussion. Considered one of the most marketable sportsmen in the world, Neymar has graced the covers of some of the biggest magazines, including Time and GQ.

Neymar has a son with his former partner Carolina Dantas.