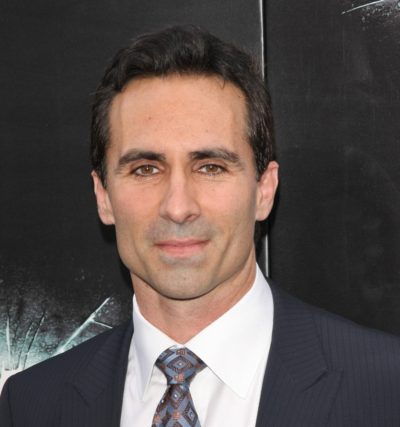 Carbonell in 2012, photo by Prphotos.com

Néstor Carbonell is an American actor, director, and screenwriter.

Néstor is the son of Rosa Ramírez de Arellano y Cárdenas and Néstor Tulio Carbonell y Cortina. His parents are Cuban, and moved to the U.S. in the 1960s. One of Néstor’s cousins is Cuban baseball player Rafael Palmeiro.

Néstor is married to Australian actress Shannon Kenny, with whom he has two children.

My parents, grandparents, and great-grandparents were born in Cuba, but my roots are Spanish. On my father’s side, Carbonell (Catalonia) y Cortina (Basque Country), and on my mother’s side, Ramírez de Arellano (Navarre) y Cardenas (Jaén). I was born in New York and I am as proud of my American nationality as of my Cuban nationality and Spanish origins. I’ve been to Spain many times and I’ve enjoyed visiting Madrid and Andalusia.

Néstor’s paternal great-grandfather was José Manuel Cortina. He was a Cuban politician, lawyer, and journalist. José was the son of Dionisio Constantino de Cortina y Arteaga, an agriculturalist, of Basque descent, and of María Luisa García y Gutiérrez, who was born in Matanzas, Cuba.

Sources: Genealogy of Néstor Carbonell (focusing on his mother’s side) – http://gw.geneanet.org

Genealogy of Néstor’s mother (focusing on her father’s side) – https://www.geni.com