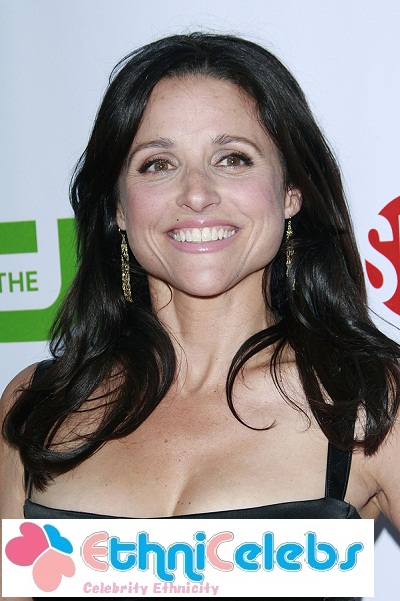 Louis-Dreyfus in 2008, image via Joe Seer/Bigstock.com

Julia Louis-Dreyfus is an American actress, comedian, producer, and singer. She is known for starring on the series Seinfeld, The New Adventures of Old Christine, and Veep, among many other roles.

Julia is the daughter of Judith and Gérard Louis-Dreyfus (also known as William Louis-Dreyfus), a businessperson. Her father was French-born, while her mother was American-born. Her stepfather, L. Thompson Bowles, was Dean of the George Washington University Medical School. Julia is married to comedian and actor Brad Hall, with whom she has two children. Julia’s half-sister is actress Lauren Bowles, who is married to actor Patrick Fischler.

Julia’s paternal grandfather was a French Jew, from a prominent family. Julia’s paternal grandmother was born in New York, to a Brazilian Jewish father, and to a mother who had Mexican and English ancestry, and was Catholic. Julia’s mother’s ancestry includes French, German, English, Scottish, and Scots-Irish/Northern Irish. During her childhood, Julia’s mother occasionally took her to Unitarian services.

Julia’s paternal grandfather was Pierre Louis-Dreyfus (Pierre Guy Robert Louis-Dreyfus, the son of Charles Louis-Dreyfus and Sarah Germaine Hément). Pierre was born in Paris, France, to a Jewish family, with roots in Alsace; he fought in the French Resistance during World War II, flying 88 missions for Charles de Gaulle’s Free French Air Force. He later chaired the family’s company, Louis Dreyfus Company, which is involved in agriculture, food processing, international shipping, and finance. Charles was born in Zurich, Switzerland, the son of Léopold Cerf Léon Louis-Dreyfus, an investor and businessperson, who founded the company, as Louis Dreyfus Group in 1851; and of Émilie Lang. Julia’s great-grandmother Germaine was born in Paris, the daughter of Edgard Hément and Berthe Pauline Worms.

Julia’s paternal grandmother was Dolores Neubauer (the daughter of Henry Neubauer and Maria Manuela/Mancueala Velez Escalante). Dolores was born in New Rochelle, New York, U.S. She was Catholic. Julia’s great-grandfather Henry was born in either Brazil or the Netherlands, and was Jewish, the son of Marcus/Marc Cahen Neubauer, who was born in Den Haag, Netherlands, and of Julia Schilsky, who was born in London, England. Julia Schilsky was herself the daughter of Joseph Hendrik/Henry Schilsky, who was born in Sulęcin, Powiat Sulęciński, Woiwodschap Lubusz, Poland, and of Clara Bloch, who was born in Metz, Moselle, Alsace-Lorraine, France. Julia’s great-grandmother Maria Manuela/Mancueala Velez Escalante was Mexican, and was born in Altar, Sonora, the daughter of Vicente/Vincente Velez Escalante or Joseph Manuel Toribio de Escalante, and of Maria Sabina de los Dolores Washington y Sydnor; Manuela was of approximately three quarters Mexican, and one quarter American/English-American, ancestry. This makes Julia’s ancestry approximately 9.375% Mexican.

Julia’s maternal grandfather was Harry Everett LeFever (the son of Errett William A. LeFever and Lola May Howard). Harry was born in Ohio. Julia’s great-grandfather Errett was a Republican member of the Ohio House of Representatives, and was the son of Isaac P. LeFever and Bathsheba Jane Shepard. Lola was the daughter of Alfred Taylor Howard and Lucretia H. Mitchell.

Julia’s maternal grandmother was Grace E. Riggs (the daughter of Joseph/Joe W. Riggs and Bessie/Bess Luella/Louella Stahlman). Grace was born in Pennsylvania. Joseph was the son of Winfield Scott Riggs and Margaret Ann White. Bessie was the daughter of William Henry Stahlman and Mary Ellen Knapp.