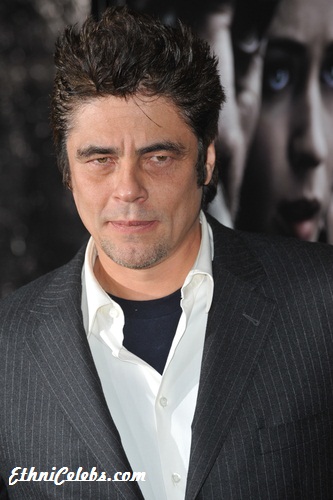 Benicio del Toro is a Puerto Rican actor and film producer. He won the Academy Award for Best Supporting Actor for Traffic (2000).

He was born in San Germán, Puerto Rico, the son of Fausta Genoveva Sánchez Rivera and Gustavo Adolfo del Toro Bermúdez. He moved to the continental United States at the age of thirteen, living in Mercersburg, Pennsylvania. Benicio is also famous for his appearances in the films Frank Miller’s Sin City, Snatch, and as Che Guevara in Che.

Benicio has a daughter with television personality Kimberly Stewart. Kimberly is the daughter of singer Rod Stewart.

Benicio is fluent in Spanish and uses his language ability in his film performances. He holds Spanish citizenship, and has stated: “Mi familia viene de España. Mi madre era muy Española” (“My family comes from Spain, my mother was very Spanish”).

Benicio’s maternal grandmother was Lirio/Licio/Licia/Lucia/Lili Belén Rivera Bengoa (the daughter of Rafaél Rivera Esbri and Fausta Bengoa Larrauri). Lirio was born in Ponce. Rafaél was one of the heroes of the El Polvorin fire in Ponce. He was later Mayor of Ponce, from 2 January, 1915 to 2 January, 1917. Rafaél was the son of Ramón Rivera Alvarado and Julia Esbri/Estri y Robert. Benicio’s great-grandmother Fausta was the daughter of Gervasio Bengoa Saez de Valluerca and Juana Maria Larrauri y Aponte, who were born in Valluerca, Alava, Basque Country, Spain.