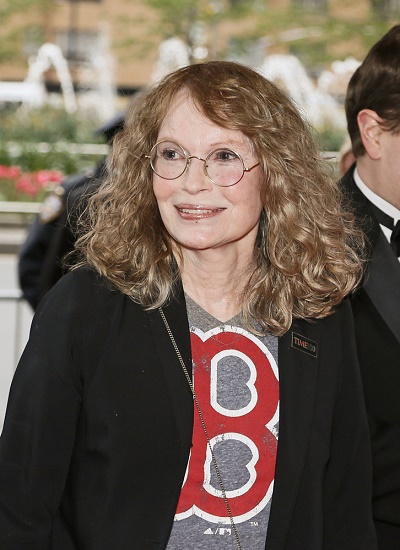 Mia Farrow is an American actress, model, and activist. Among her roles are Rosemary’s Baby, The Great Gatsby, A Wedding, Death on the Nile, A Midsummer Night’s Sex Comedy, The Last Unicorn, Broadway Danny Rose, The Purple Rose of Cairo, Hannah and Her Sisters, Alice, The Omen (2006), and The Watcher (2022).

Her father was Australian director John Farrow (John Villiers Farrow) and her mother was Irish actress Maureen O’Sullivan. Mia’s father was of English ancestry. Mia’s mother, aside from being of Irish descent, had Scottish and English ancestry. Among her siblings were/are sculptor Patrick Villiers Farrow and actresses Stephanie Farrow and Tisa Farrow.

Mia has fourteen children; including activist, journalist, and lawyer Ronan Farrow, from her previous relationship with director, writer, and actor Woody Allen; and six with her former husband, pianist, conductor, and composer André Previn. Ten of her children were adopted. She often collaborated with Woody, appearing in many of his films.

A DNA test whose results were displayed on the show Finding Your Roots with Henry Louis Gates, Jr. (2019) stated that Mia’s genetic ancestry is:

Genetically, she was found to have a common ancestor with actress and comedian Jane Lynch and director and filmmaker Lee Daniels.

Mia’s paternal grandmother was Lucy Savage (the daughter of George Savage and Emily Piggott). Lucy was born in Brunswick, Victoria. George was born in Melbourne, Victoria, to English parents, from Buckinghamshire, George Savage and Susannah Makepeace, who had come to Australia in 1848 as farm laborers. Emily was English, from Manchester, Lancashire, the daughter of Ellis Piggott and Nancy Kirk.

Mia’s maternal grandmother was Evangeline Lovatt “Mary Eva” Frazer (the daughter of John Lovat Frazer and Mary Eva Kennett). Evangeline was born in Tientsin, China, to a father from County Sligo, Ireland, who had Scottish ancestry, and to a mother from St. Marylebone, London, England. John was the son of Edward Frazer and Mary Kirkwood. Mia’s great-grandmother Mary Eva was the daughter of Henry Kennett and Mary Devereux.