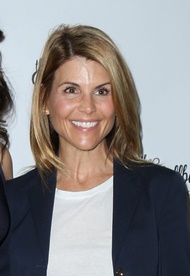 Loughlin in 2015, photo by Prphotos.com

Lori Loughlin is an American actress, model, and producer.

She is married to fashion designer Mossimo Giannulli, with whom she has two children, including social media personality Olivia Jade. Mossimo created the Mossimo clothing line.

Lori’s paternal grandmother was Margaret Pye (the daughter of William Pye and Ellen C. Sipp). William was the son of William Henry Pye and Rebecca A. Jones. Ellen was the daughter of George Frank Sipp and Ellen Regina McGrath, whose father was an Irish immigrant.