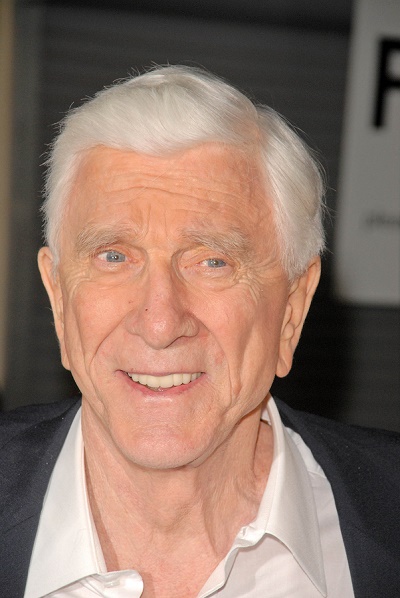 Nielsen in 2009, photo by s_bukley/Bigstock.com

Leslie Nielsen was a Canadian actor, comedian, and producer. He also became a U.S. citizen.

Leslie was the son of Mabel Elizabeth (Davies) and Ingvard Eversen Nielsen, a constable in the RCMP. His father was Danish, from Esbjerg. His mother was a British immigrant, of Welsh descent.

His brother, Erik Nielsen (Erik Hersholt Nielsen), was a Canadian politician, who was Deputy Prime Minister of Canada, from September 17, 1984 to June 30, 1986, and Minister of National Defence, from February 27, 1985 to June 29, 1986, among other duties. Leslie was married to Barbaree Earl, until his death. He had two children with his former wife Alisande Ullman.

Leslie’s paternal grandmother was Clara/Claire Petersen (the daughter of Carl Magnus Petersen and Frederikke Jacobsen). Clara was born in Copenhagen. She was the mother of Leslie’s uncle, Jean Hersholt (Jean Pierre Hersholt), a Danish actor. Carl was the son of Carl Magnus Petersen and Eva Marie Conradsen Frisch. Frederikke was the daughter of Jacob Jacobsen and Adelina Salomonsen.

Source: Genealogy of Leslie Nielsen (focusing on his father’s side) – http://www.geni.com