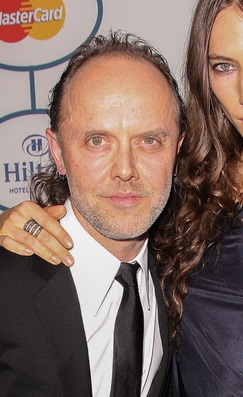 Ulrich in 2014, photo by Prphotos.com

Lars is the son of Lone (Sylvester-Hvid) and Torben Ulrich, from Frederiksberg, Denmark. Lars moved to the U.S. in 1980 when he was seventeen years old.

Lars is married to American model Jessica Miller. He has two children with his former wife, physician Skylar Satenstein; and a child with his former partner, Danish actress Connie Nielsen.

Lars’s father’s ancestry is half Ashkenazi Jewish, with the rest being German, and possibly Danish. Lars’s mother was of Danish, and one eighth Jewish, background.

Lars’s paternal grandfather was Einer Ulrich (the son of Aage Louis Francis Ulrich and Ellen Margrethe Wiegell). Einer, a prominent tennis player, was born in 1896 in Copenhagen. Aage was the son of German parents, Carl Ludwig Lucien Ulrich and Nina Francisca Vilhelmine Holm, from Eckernförde, Schleswig-Holstein. Ellen may have also been of German descent.

Lars’s paternal grandmother was Ulla Meyer (the daughter of Otto Meyer and Alice Hertz). Ulla was born in Copenhagen, and was a Danish Jew. Many of Ulla’s ancestors were German Jews and Czech Jews. After the Nazi occupation of Denmark in 1940, the family decided to stay in the country; as a result, they were persecuted. They then escaped to Sweden, but after the end of the war, they moved back to Denmark. Otto was the son of Julius Louis Alfred Meyer and Thea Marie Johanne Friedländer. Alice was the daughter of Jacob Peter Hertz and Harriet Bertha Bendix.

Lars’s maternal grandfather was Sven Sylvester Hvid (the son of Jens Simon Victor Sylvester Hvid and Anna Julie Domine Kragh). Sven was born in Copenhagen. Jens was the son of Andreas Theodor Hvid and Rosa/Rosalie Simon Ballin, who was Jewish. Anna was the daughter of Harald Ludvig Christian Kragh and Marie Dorothea Bruun.