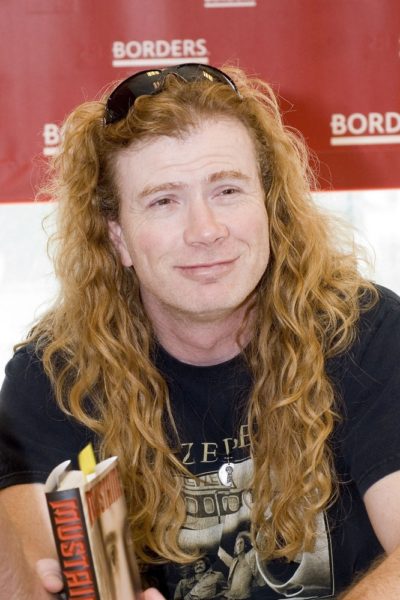 Mustaine in 2010, photo by prphotos.com

Dave is the son of Emilie/Emily Marie (David) and John Jefferson Mustaine. Dave’s father had English, German, Irish, Welsh, Scottish, and remote French and Dutch, ancestry. Dave’s mother was a Jewish emigrant from Germany, of Polish Jewish and German Jewish descent; she moved to the U.S. around 1923.

Dave was raised a Jehovah’s Witness. He is now a born-again Christian.

Dave is married to Pamela Casselberry, with whom he has two children.

Dave has repeatedly stated that he has Finnish ancestry, and that his surname was spelled Mustonen several generations back. It is not clear if this ancestry has been verified/documented. Dave’s patrilineal line can be traced back to his fifth great-grandfather, Thomas Averleigh Mustain, who was born, c. 1720, in Lunenburg, Virginia. There were not many Finnish immigrants in the U.S. before the the 1870s, when “The Great Migration” started, although some Finnish people settled in the Swedish colony of New Sweden between 1640 and 1655.

Dave’s paternal grandfather was Frank Leslie Mustaine (the son of Jefferson Keech Mustaine and Adriah/Adria Ellen Lucas). Frank was born in Ohio. Jefferson was the son of Meakin/Meakon Ashley Mustaine and Mary Elizabeth Keech. Adriah was the daughter of John L./Ellsworth Lucas and Sarah Carlisle.

Dave’s maternal grandfather was named Friedrich Otto August David (the son of Foster David and Dara). Friedrich was born in Trzebiatów/Treptow, then in Prussia, Germany, now in Poland.

Genealogies of Dave Mustaine (focusing on his father’s side) – http://wc.rootsweb.ancestry.com
https://www.wikitree.com