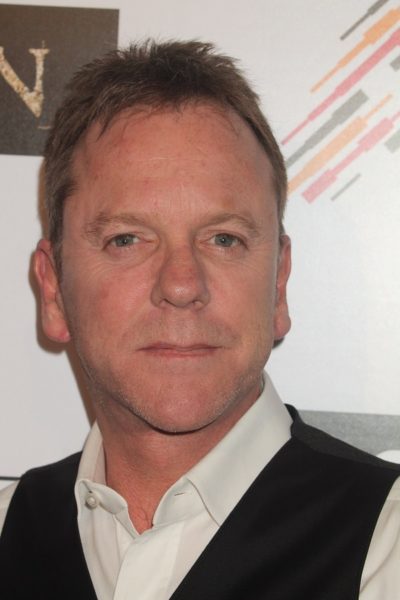 Sutherland in 2016, photo by kathclick/Bigstock.com

Kiefer Sutherland is an English-born Canadian actor, producer, director, singer, and songwriter. He is known for starring in the series 24 and the films The Lost Boys and Phone Booth, among many others.

Kiefer was born in London, England, to Canadian parents, actors Donald Sutherland (Donald McNichol Sutherland) and Shirley Douglas (Shirley Jean Douglas). Kiefer was raised in Canada and in California. He holds both British and Canadian citizenship. He has a daughter, actress Sarah Sutherland, with his former wife, actress Camelia Kath. His half-brother is actor Rossif Sutherland.

Kiefer is of Scottish, English, Irish, as well as 1/32 German, descent. His father has American-born ancestors. Kiefer’s maternal grandfather, Tommy Douglas, was a Scottish immigrant and Presbyterian minister, who was the first Leader of the New Democratic Party in Canada.

Kiefer is named after Warren Kiefer, an American-born writer and director who directed Donald Sutherland in Castle of the Living Dead, one of his first films.

Kiefer’s paternal grandmother was Dorothy Isobel/Isabel McNichol (the daughter of William McNichol and Mary Chalmers Hamilton). Dorothy was born in Hopewell, Pictou, Nova Scotia. William was the son of John McNichol, who was born in Perthshire, Scotland, and of Isabella Hamilton, whose parents were Scottish, her father from Argyll and her mother from Ayrshire. Mary Chalmers was the daughter of Peter Hamilton and Mary Chalmers, who were the children of Scottish parents.

Kiefer’s maternal grandfather was Thomas Clement “Tommy” Douglas (the son of Thomas Douglas and Annie/Ann Clement). Kiefer’s grandfather Tommy Douglas was born in Camelon, Falkirk, Scotland. His family moved to Canada in 1910, settling in Winnipeg, Manitoba. Kiefer’s grandfather was a Presbyterian minister and politician, who was the 7th Premier of Saskatchewan, from July 10, 1944 to November 7, 1961, the first Leader of the New Democratic Party, from August 3, 1961 to April 24, 1971, and a Member of the House of Commons of Canada, from October 14, 1935 to June 15, 1944, from October 22, 1962 to June 25, 1968, and from February 10, 1969 to May 22, 1979. He introduced North America’s first single-payer, universal health care program, Medicare, in Saskatchewan. Kiefer’s great-grandfather Thomas was the son of Thomas Douglas and Isabella Melville. Kiefer’s great-grandmother Annie was the daughter of Andrew Clement and Annie McGregor.