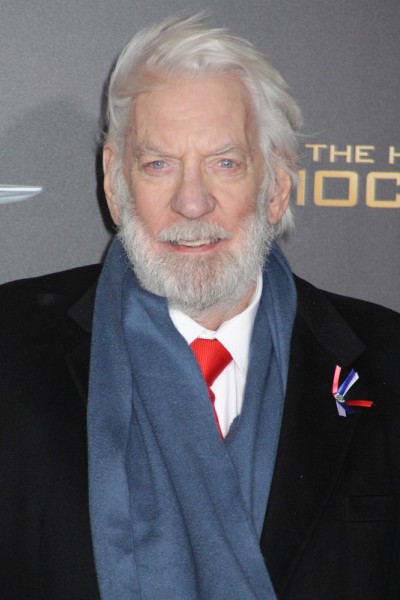 Sutherland in 2015, photo by Prphotos

Donald Sutherland is a Canadian actor. He has had leading roles in the films M*A*S*H, Klute, Don’t Look Now, Invasion of the Body Snatchers, Murder by Decree, Ordinary People, Outbreak, Pride & Prejudice (2005), and The Hunger Games, among many others.

His father’s ancestry was Scottish, English, and one eighth German. His mother was of entirely Scottish descent.

Donald’s paternal grandfather was Frederick Winslow Sutherland (the son of John Sutherland and Mary Angeline Pentz). Frederick was born in Lockport, Shelburne, Nova Scotia. John was the son of Scottish parents, Peter Sutherland, from Caithness, and Isabella McLea, from Moray. Mary Angeline was the daughter of John Martin Pentz, who was of German descent, and of Catherine Chandler.

Donald’s maternal grandfather was William McNichol (the son of John McNichol and Isabella Hamilton). William was born in Dalhousie, Restigouche Co., New Brunswick. John was born in Perthshire, Scotland, the son of James McNichol and Elizabeth Kerr. Isabella was the daughter of Scottish parents, William H. Hamilton, from Argyll, and Mary Margaret McKelvie, from Ayrshire.

Donald’s maternal grandmother was Mary Chalmers Hamilton (the daughter of Peter Hamilton and Mary Chalmers). Donald’s grandmother Mary was born in Dalhousie, Restigouche Co., New Brunswick. Peter was born in New Brunswick, the son of Scottish parents, Peter Hamilton and Elizabeth Hamilton, both from the Isle Of Arran. Donald’s great-grandmother Mary was the daughter of Scottish parents, John Chalmers, from Argyll, and Mary Galbraith.