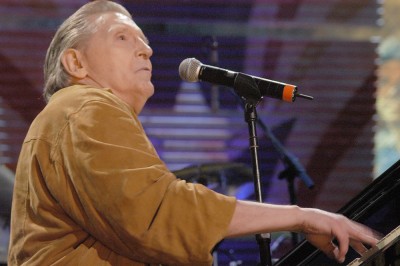 Jerry Lee Lewis was an American singer, songwriter, and pianist. One of the pioneers of rock ‘n’ roll, he was also regarded as one of the most influential pianists of the 20th century. He was nicknamed “The Killer.”

Jerry Lee was the son of Mary Ethel “Mamie” and Elmo Kidd Lewis. He was raised in an impoverished farm family. His sister was singer, songwriter, and pianist Linda Gail Lewis. He was a paternal cousin of country music singer Mickey Gilley, a cousin of pianist Carl McVoy, and a maternal cousin of Pentecostal televangelist Jimmy Swaggart.

Jerry Lee’s patrilineal ancestry can be traced to his twelth great-grandfather, Ifan Iorwerth ap Einion, who was born, c. 1512, in Bryngwallon, Wales.

Jerry Lee’s maternal grandfather was John William “Will” Herron (the son of George B. Herron and Mary C. Hesler). John was born in Kentucky. George was the son of William Matthew Herron and Catherine Hood. Mary was the daughter of John Hesler, who was German, and of Betsy.

Jerry Lee’s maternal grandmother was Theresa Lee “Trissie” Forman/Foreman (the daughter of Edward David Forman and Susan D. Russell). Theresa was born in Louisiana. Edward was the son of Imsay/Ismael James Forman, whose own father was a Christian minister, and of Catherine Troxell.