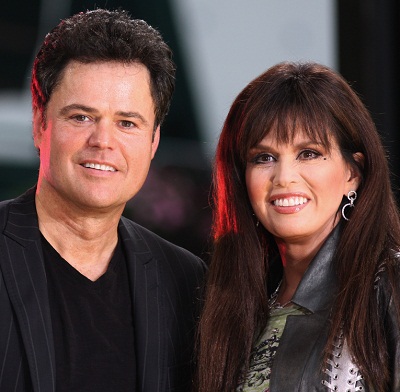 The Osmonds in 2008, photo by prphotos

Donny and Marie are the children of Olive May (Davis) and George Virl Osmond. Donny is married to Debra Glenn, with whom he has five children. Marie is married to Stephen Lyle Craig. She has seven children with her former husband Brian Blosil; and a son with Stephen.

Donny and Marie’s paternal grandmother was Agnes/Agness LaVerna Van Noy/VanNoy (the daughter of Thomas Lorenzo Van Noy and Martha Tyresha Vail). Agnes was born in Wyoming. Thomas was the son of William Thomas Van Noy and Agnes Birrell/Burrell, who was born in Barony, Glasgow, Scotland. Martha was the daughter of Isaac Hawk Vail and Tyresha/Tryisha Ann Beeler/Beelar.

Donny and Marie’s maternal grandfather was Thomas Martin Davis (the son of Samuel Williams Davis and Mary Ann Martin). Thomas was born in Idaho. Samuel was born in Pennsylvania, the son of Welsh parents, Thomas John Davis/Davies, who was from Neath, Glamorganshire, and Elizabeth “Eliza” Williams, who was from Ystradgynlais, Powys. Mary Ann was born in Utah, the daughter of Welsh parents, John Martin, from Laugharne, Carmarthenshire, and Anna Jenkins, from Lantwit Vardre, Glamorganshire.

Donny and Marie’s maternal grandmother was Vera Ann Nichols (the daughter of Benjamin Thomas Nichols and Olive Lovenia/Lovinia Booth). Vera was born in Wyoming. Benjamin was born in Utah, the son of English parents, William Nichols, from Westerton, Durham, and Ellen White, from Bishop Middleham, Durham. Olive was born in Utah, to English parents, John Booth, who was from Middleton, Lancashire, and Ann Lythgoe, who was born, in 1836, in West Leigh, Lancashire.