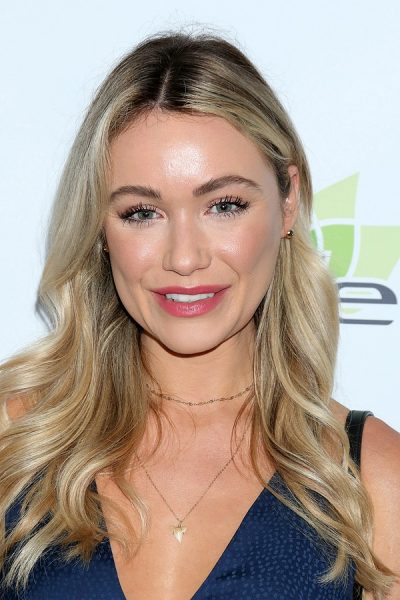 Bowden in 2019, photo by kathclick/Bigstock.com

Katrina Bowden is an American actress. She is known for her roles in horror and comedy films.

Her father was born in London, England, and moved to the U.S. in the 1980s. She is married to musician and singer Ben Jorgensen, formerly of the band Armor for Sleep.

Katrina’s paternal grandfather was Albert Bowden (the son of Joseph Bowden and Annie Elizabeth Shaw). Albert was born in Sheffield, Yorkshire. Katrina’s great-grandmother Annie was the daughter of Robert Shaw and Fanny Tingle.

Katrina’s paternal grandmother was named Winifred May Briggs (the daughter of William Henry Briggs). Winifred was born in West Ham, Essex, England. William was the son of Henry Briggs and Annie/Ann Quipp.

Katrina’s maternal grandmother was Virginia May Ortmayer (the daughter of Elmer Anton Ortmayer and Lillian Fay Russell). Virginia was born in Dearborn, Michigan. Elmer was the son of Anthony Ortmayer, who was a German immigrant, and of Maria Christina Bruns, whose parents were German emigrants, from Lower Saxony. Lillian was the daughter of William Rutson Russell, who had deep roots in the U.S., and of Ida Lorraine Partridge, whose father had deep American roots, and whose mother was of German descent.