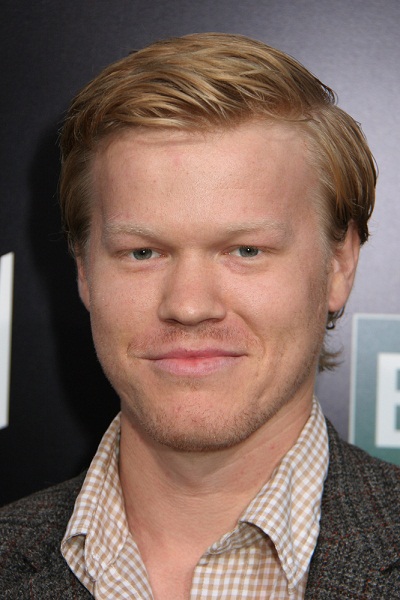 Plemons in 2013, photo by PrPhotos

Jesse Plemons is an American actor. His roles include I’m Thinking of Ending Things, Jungle Cruise, Black Mass, Antlers, The Power of the Dog, and Breaking Bad, among many other films and series.

He was raised partly in Mart, Texas. He is married to actress and model Kirsten Dunst, with whom he has two children.

One of Jesse’s paternal five times great-grandmothers, Emily Margaret Brown Austin, an early and prominent Texas settler, was a sister of Stephen F. Austin (Stephen Fuller Austin), an empresario who led the English-speaking colonization of Texas in the early 1800s. Stephen is known as the “Father of Texas.” The capital Austin is named after him.

Jesse’s paternal grandfather was Ira Alonzo/Lon Plemons (the son of James Robert Plemons and Lelia Louise Bryan). Ira was born in Texas. James was the son of Alonzo Lon Jefferson Plemmons/Plemons and Mary Lou Williams. Lelia was the daughter of Ira James Bryan and Olivia Pankey.

Jesse’s maternal grandfather was Joseph Herman Cason (the son of John Joseph Cason and Charity Armentie/Armenta/Arminta/Armintie Dinero Oxley). Joseph was born in Texas. John was born in Alabama, the son of Joseph Monroe Cason and Calista W. Moody. Charity was born in Texas, the daughter of Johann/John Conrad/Charles “J. C.” Oxley/Oechslin, who was born in Schaffhausen, Switzerland, and of Frances/Francis Scoldin Nostic/Nostie Latham.

Genealogy of Jesse’s paternal grandfather, Ira Alonzo/Lon Plemons (focusing on his own father’s side) – http://worldconnect.rootsweb.ancestry.com

Genealogy of Jesse’s paternal grandfather, Ira Alonzo/Lon Plemons (focusing on his own mother’s side) – http://worldconnect.rootsweb.ancestry.com