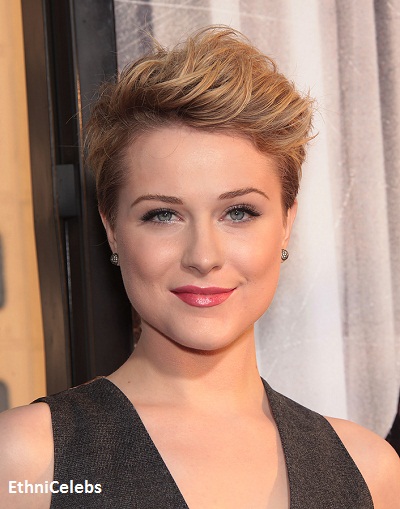 Wood in 2011, image by DFree/bigstock

Evan’s father is Christian. Evan’s mother, who was raised in a Christian family, converted to Judaism during her own high school years. (a picture of Evan’s mother in her school year book can be seen here). Evan’s stepfather is also Jewish. On the audio commentary on the Thirteen (2003) DVD, Evan described herself as Jewish. In 2012, Evan stated, “I believe in God but I am not religious.” In 2013, Evan stated, “[I was raised] half Jewish and half Christian. but today I practice neither. I am more spiritual than religious.” She has also said, “My mother is Jewish and I was raised with the religion…”

Evan’s maternal grandfather is Richard Alan/Alen Moore (the son of Ira Mack “Denny” Moore and Helen Adoline Fakes). Richard was born in Missouri, and is a prominent landscape architect. Ira was the son of Solomon Festus Moore and Nora Louise McCloud/McLeod. Helen was the daughter of Baron DeCalb Fakes and Rosa Lee Snow.

Evan’s maternal grandmother is Patricia Ruth Burke (the daughter of William Francis Burke and Louise Philippine Hartmann/Hartman). Patricia was born in Missouri. William was the son of Robert Fletcher Burke, who was Irish, and of Hester A. Woody. Louise was of German descent, the daughter of Wilhelm/William Frederich Hartmann/Hartman, who was German, and of Louise Caroline Wissler, who was born in Missouri, to German parents.

Evan’s paternal grandmother’s surname, Winstead, is shared by actress Mary Elizabeth Winstead, who is also from North Carolina. While Evan and Mary Elizabeth likely have a common Winstead ancestor, this shared connection is distant, in or before the mid 1700s.

Genealogy of Evan Rachel Wood (focusing on her father’s side) – http://familypedia.wikia.com

Genealogy of Evan’s maternal great-grandmother, Helen Adoline Fakes (focusing on her own mother’s side) – http://worldconnect.rootsweb.ancestry.com