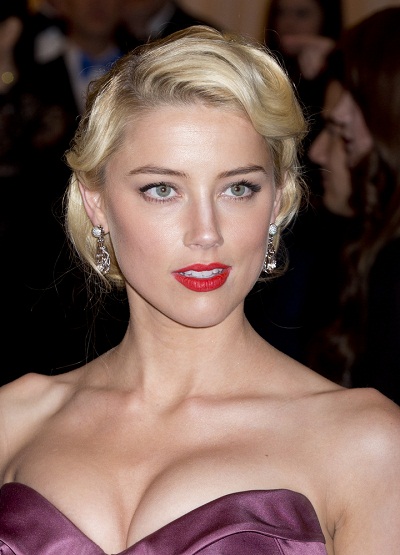 Amber Heard is an American actress and model. Her roles include Friday Night Lights, Alpha Dog, Never Back Down, Zombieland, The Stepfather, Drive Angry, The Ward, Paranoia, Machete Kills, 3 Days to Kill, Magic Mike XXL, and Aquaman. She has also been credited as Amber Laura Depp and Amber van Ree.

Amber is the daughter of Patricia and David Heard. Much of Amber’s family has lived in the United States for many generations. Amber has a daughter.

Amber’s paternal grandfather is Harlin Clinton Heard (the son of John Turner Heard and Luller/Lula Bell/Belle Dobbs). Harlin was born in Oklahoma. John was the son of William Paxton Heard and Mary Elizabeth/Isabelle/Isabell Nancy Copeland. Luller was the daughter of William Moore Dobbs and Elizabeth Casteel.

Amber’s maternal grandfather is William Joseph Parsons (the son of Edward Breck Parsons and Rose Neerlich). William was born in New York. Edward had English and Scottish ancestry, and was the son of William Henry Parsons and Sophia King Breck. Rose was German, the daughter of John Neerlich and Katherine Kaulas.

Amber’s maternal grandmother is Cecilia Corrinne Carroll (the daughter of Gerald Aloysius Carroll and Virginia Morgan McGie). Cecilia was born in Missouri. Gerald was of Irish descent, and was the son of Dennis Carroll and Johanna/Hannah/Hanna Barry. Virginia was the daughter of John McGie/McGee, who was born in Canada, to Scottish parents, and of Frances Louise Moore, who was from Virginia.

Genealogy of Amber’s father (focusing on his father’s side) – http://worldconnect.rootsweb.ancestry.com

Genealogy of Amber’s father (focusing on his mother’s side) – http://worldconnect.rootsweb.ancestry.com