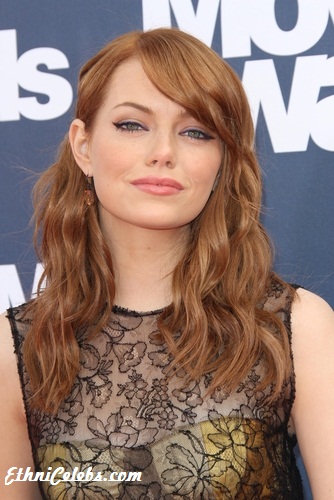 Emma is the daughter of Krista and Jeffrey Stone. Her paternal grandfather is of Swedish descent. Much of Emma’s other ancestry is German. She also has Welsh, Irish, English, Scottish, and Swiss-German ancestry. Her maternal grandparents were from families that had lived in the United States for many generations, specifically in Ohio and Pennsylvania.

Emma is married to comedian, writer, and director Dave McCary, with whom she has one child.

In the film Aloha (2015), Emma played Allison Ng, a character who was mentioned in the film as having a father who was of half Chinese and half Hawaiian descent, and a mother who was white, of Swedish descent. The casting received criticism, and the film’s director, Cameron Crowe, apologized. Emma is not of Asian heritage.

Emma’s maternal grandfather was Donald Earl “Don” Yeager (the son of Irvin Sylvester Yeager and Esther Katharine Parks). Donald was born in Pennsylvania. Irvin was the son of Sylvester Noll Yeager and Mary/Mamie E. Burke. Esther was the daughter of Alfred Parks and Ann/Annie Gertrude Knuffman/Knufmann/Kauffman.

Emma’s maternal grandmother is Jean Louise Eiseman (the daughter of Cyrus Robert Iceman/Eiseman/Eiceman and Ruth Ann Henry). Jean was born in Pennsylvania. Cyrus was the son of Robert Patterson Eiceman and Esther Lurline/Lurine Hoffman. Ruth was the daughter of Jackson Henry and Eliza/Lydia Jane Turner.

Emma discusses some of her ancestry, including her Swedish and Pennsylvania Dutch roots – http://img200.imagevenue.com

Genealogy of Emma Stone (focusing on her mother’s side) – https://www.wikitree.com