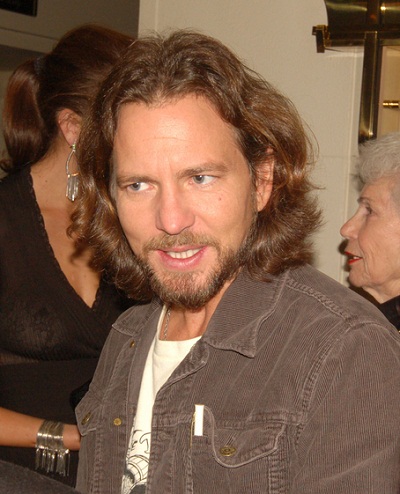 Vedder in 2007, photo by Prphotos.com

Eddie Vedder is an American musician, singer, and songwriter. He is the singer for alternative rock band Pearl Jam. Other members of Pearl Jam include or have included Dave Abbruzzese, Jeff Ament, Matt Cameron, Stone Gossard, and Mike McCready.

Eddie is the son of Karen Lee Vedder and Edward Louis Severson, Jr. His parents divorced in 1965, when Eddie was an infant. His mother soon remarried, to a man named Peter Mueller. Vedder was raised believing that Peter was his biological father, and he went by the name Edward Mueller for a time.

Eddie is married to model Jill McCormick, with whom he has two children.

Eddie’s maternal Vedder line traces to Harmen Albertse Vedder, who was born, c. 1635, in Amsterdam, the Netherlands, the son of Albert Vedder.

Eddie’s paternal grandmother was Claire/Clara Jacobsen (the daughter of Theodore Jacobsen and Ragna Johanna Jacobsen). Claire was born in Illinois, to parents from Farsund, Agder, Norway.

Genealogy of Eddie Vedder (focusing on his mother’s side) – http://www.wargs.com