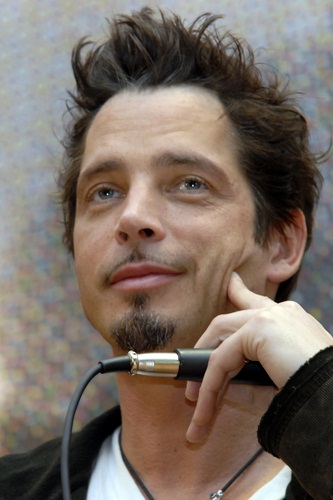 Chris Cornell was an American musician, singer, and songwriter. He was the lead singer, guitarist, and songwriter for rock bands Soundgarden (1984–1997) and Audioslave (2001–2007). Other members of Soundgarden include or have included Matt Cameron, Jason Everman, Ben Shepherd, Scott Sundquist, Kim Thayil, and Hiro Yamamoto. The other members of Audioslave were Tim Commerford, Tom Morello, and Brad Wilk.

Chris was married to publicist Vicky Karayiannis, until his death. He had a daughter with his former wife, manager Susan Silver, and two children with Vicky.

Chris converted to the Greek Orthodox religion of his wife Vicky.

In an interview on Howard Stern’s show, c. 2007, Chris appeared to state that his mother is Jewish. This is not accurate.

Chris’s patrilineal ancestry can be traced back to his third great-grandfather, Denis Boyle.

Chris’s paternal grandmother was Anona Ruth Olson/Olsen (the daughter of Eivin/Ivan Olaus Olsen, later Olsen, and of Carrie Lorena Jones/McGuire). Anona was born in California. Eivin was a Norwegian emigrant, from Stavanger, Rogaland, and was the son of Ole Olsen Blaasenberg, later Vaaland, and of Andrine Tønnesdatter Bjuland.

Chris’s maternal grandfather was Ralph Trivett Cornell (the son of Julian Trivett Cornell and Emily Keillor Emmerson). Ralph was born in Rothesay, Nova Scotia, Canada. Julian was the son of Robert/Ralph Filmore Trivett Cornell, whose parents were Irish, and of Anne/Annie Eudora Maxon/Maxim. Emily was the daughter of Henry Robert Emmerson and Emily Charlotte Record. Chris’s great-great-grandfather Henry was a lawyer, businessperson, politician, and philanthropist, who as a member of the Liberal Party, was Premier of New Brunswick, from October 29, 1897 to August 31, 1900, among other duties.

Chris’s maternal grandmother was Marion/Marian M. MacNutt (the daughter of James Frederick MacNutt and Clarabell/Claribel Josephine Hubbell). Marion was born in Washington. James was a Canadian emigrant, from Darmley, Prince Edward Island, and was the son of George Beairsto MacNutt and Annie McGougan Rodd. Clarabell was born in Wisconsin, the daughter of Fred Keaton Hubbell and Annetta Alta Remer.

Chris’s matrilineal ancestry can be traced to his fourth great-grandmother, Elisabeth Hoffmann, who was born, c. 1821, in Hesse, Germany.