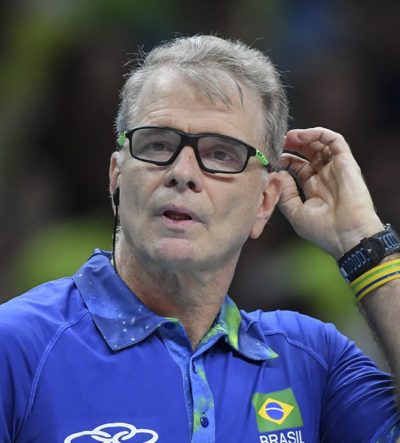 Bernardinho in 2016, photo by Celso Pupo/www.bigstockphoto.com/

Ethnicity: Brazilian [Portuguese, including Azorean, likely some Slovenian, other]

Bernardo Rezende, also known as Bernardinho, is a Brazilian volleyball coach and player.

Bernardinho is the son of Mariangela (Rocha) and Condorcet Pereira de Rezende.

His Portuguese ancestry includes Azorean Portuguese from the islands of Faial and Terceira.

Bernardinho’s paternal grandfather was Octavio/Otávio Murgel de Rezende/Resende (the son of Astolpho/Astolfo Vieira de Rezende/Resende and Olga Murgel). Octávio was born in Minas Gerais, Brazil. Astolpho was born in Minas Gerais, the son of José Vieira de Resende e Silva and Feliciana Vieira Dutra Nicácio. Olga was the daughter of Maurício Murgel, who was born in Fiume, Austria-Hungary (now Rijeka, Croatia), and likely was an ethnic Slovenian, and of Maximiana Tertuliana Benedicta do Bonsucesso.