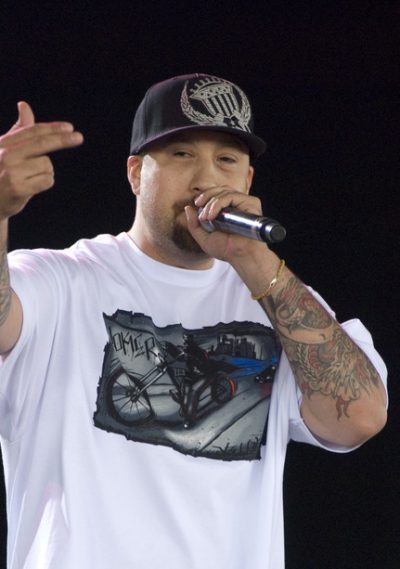 B-Real is an American rapper and actor. He is one of the two lead rappers in the hip hop group Cypress Hill, which is a part of supergroup Serial Killers. He was one of the frontmen of rap rock group Prophets of Rage. He is known for his distinctive high-pitched nasal voice, with lyrical content varying from gangster to drug-related rhymes. He is also known as Dr. Greenthumb. Eric Bobo, Sen Dog, and DJ Muggs are also members of Cypress Hill.

He was raised in South Gate, California, and later Bell, California, both in Los Angeles. He practices the Yoruba religion Ifá. A picture of B-Real’s mother can be seen here.

In an interview on BluesandSoul.com, B-Real talked about his crew and their image as a Latino group:

Fortunately I guess the fact we were able to achieve what we achieved, being Latino but without really exploiting that side of it, showed like a whole generation behind us how you could have that success without being labelled as just one THING. Because back in the day, when you were labelled ‘a Latino rapper’, the record companies would only try to market you to that Latin fan-base which didn’t really EXIST yet!… So yeah, it feels good to see people recognising us as some of the pioneers that opened the doors for a lotta these other Latino rappers to come through.