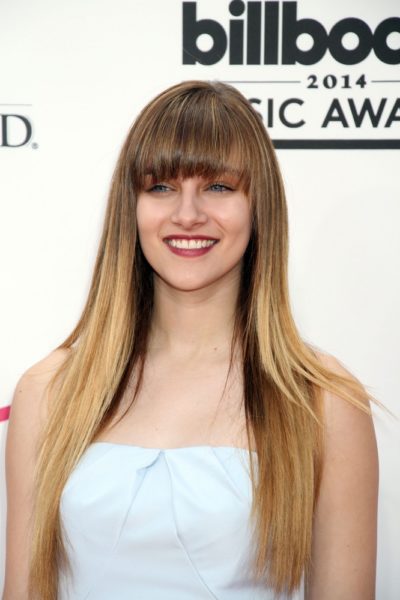 Peeples in 2014, photo by Prphotos

Aubrey Peeples is an American actress and singer. She starred as Jem in the film Jem and the Holograms (2015), and is also known for having featured in the film Heartthrob and on the show Nashville.

Aubrey’s paternal grandmother is Brooksie Ernestine Riggle (the daughter of Ernest R. Riggle and Sallie Ann Irvin). Brooksie was born in Virginia. Ernest was the son of Ward William Riggle and Maude Ellen Brewer. Sallie was the daughter of Luther Edgar Irvin and Stella Caldwell Mills.

Aubrey’s maternal grandfather is Thomas O. Bennion (the son of Owen Bennion and Gertrude Mary Eck). Thomas was born in New York. Owen was the son of Miles Seymour Bennion and Catherine Mabel Barnes. Gertrude was the daughter of Charles Homer Eck and Catherine Emma Rauner.

Aubrey’s maternal grandmother is Carole Ann Keoth (the daughter of Otto Koeth and Vilma J. Sipos). Otto was German, the son of Theodore Koeth and Dorothy. Vilma was born in New York, the daughter of Nicholas Sipos and Elizabeth Kushner, who were from Borsod-Abaúj-Zemplén, Hungary, and Nagyida, Hungary (now Veľká Ida, Slovakia), respectively.