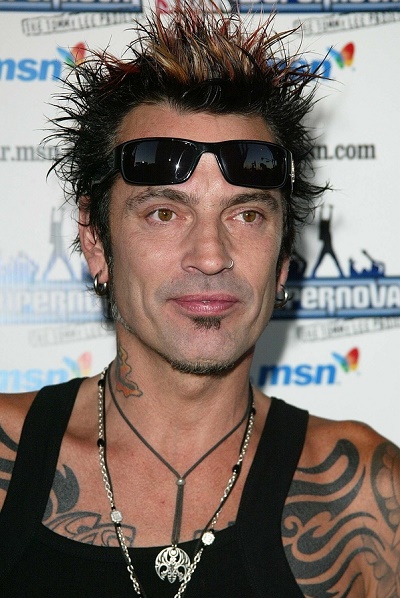 Tommy Lee is an American musician. He is founding member of, and former drummer for, heavy metal band Mötley Crüe. Other members of the band were Mick Mars, Vince Neil, and Nikki Sixx.

Tommy was born in Athens, Greece, and was raised in California, in the United States. His mother, Vassiliki “Voula” (Papadimitriou), is Greek. His father, David Oliver Bass, was an American, who had English, and some Irish and French, ancestry.

Tommy’s paternal grandmother was Julia E. Sanders (the daughter of Henry A. Sanders and May E. Patrick). Julia was born in Wisconsin. Henry was born in New York, the son of James Frederick Sanders, who was French, and of Julia O’Connoll or Sullivan, who was Irish. May was the daughter of Harvey S. Patrick and Esther Edwards.

Tommy’s father is descended from John Bass, who was born in Suffolk, Virginia. John was the son of William Basse and Catherine/Katherine Lanier/Lanyere. William was the son of John Basse, an English immigrant, and of Elizabeth Nansemond, who was Native American, and a princess of the Nansemond tribe. Catherine’s ancestry is disputed. Some sources state that she too was a Nansemond Native American, while others say that she was born to English immigrants. While some genealogies list her as the daughter of John Lanier and Lucreece Bassano, this is not the case, as their only daughter, Katherine, died as an infant.

Sources: Genealogy of Tommy Lee (focusing on his father’s side) – http://wc.rootsweb.ancestry.com