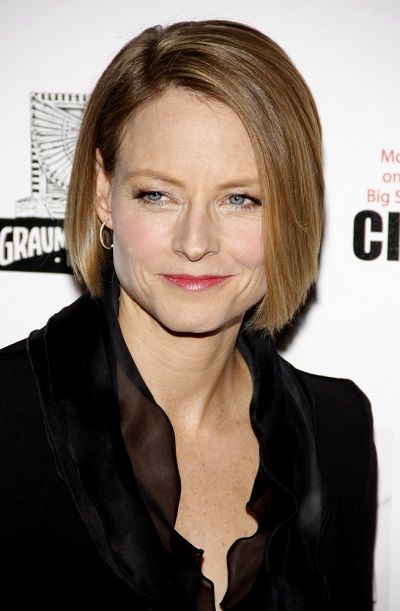 Foster in 2011, photo by PrPhotos.com

Jodie Foster is an American actress, director, producer, and filmmaker. She has twice won the Academy Award for Best Actress, for The Accused (1988) and The Silence of the Lambs (1991). She has also starred in The Little Girl Who Lives Down the Lane, Foxes, Little Man Tate (which she also directed), Contact, Panic Room, Flightplan, Carnage, and The Mauritanian, among many others.

On her father’s side, she has English and distant Scots-Irish/Northern Irish ancestry, while Jodie’s mother is sometimes cited as being of part German descent. Jodie has also said that she has roots in County Cork, Ireland.

Jodie speaks French, and dubs her own roles into the language.

Jodie’s paternal grandfather was Lucius Fisher Foster (the son of Alexis Caldwell Foster and Alice Eddy Fisher). Lucius was born in Denver, Colorado. He was a member of the 336th Fighter Squadron. Alexis was the son of Turner Saunders Foster and Harriet/Harriett Erwin. Alice was the daughter of Lucius George Fisher, Jr. and Katherine Louise Eddy.

Jodie likely descends from William Almond and Mary Ann Day, who were English, from Yorkshire.

Genealogy of Jodie Foster (focusing on her father’s side) – http://freepages.genealogy.rootsweb.ancestry.com