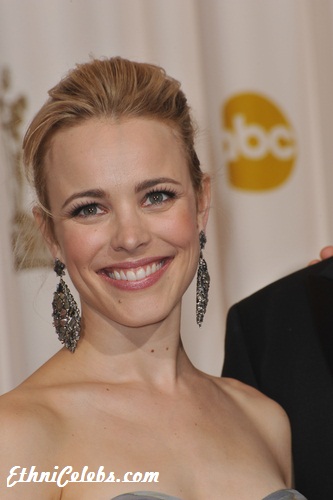 McAdams in 2010, image via s_bukley / Shutterstock.com

Rachel McAdams is a Canadian actress. Her film breakthrough occurred in 2004, when she starred as popular queen bee Regina George in Mean Girls and heiress Allie Hamilton in The Notebook.

Rachel is the daughter of Sandra and Lance McAdams. Some of her forebears were American-born. Her sister, Kayleen, is a celebrity make-up artist. Rachel has a son with her partner, American screenwriter Jamie Linden.

Rachel’s paternal grandfather was Cecil Leslie McAdams (the son of Christopher Henry Brown McAdam/McAdams and Alice Etta Alfreda/Elfreda Daniels). Cecil was born in Ontario. Christopher was the son of Frederick/Fred B. McAdam/McAdams, whose parents were Irish, and of Eliza/Elisa Ellen Crowe, who was of English, Irish, and Cornish descent. Alice was the daughter of William Edward Daniels and Susannah/Susanna Annie Hubble.

Rachel’s maternal grandfather was Harold Gowan Gale (the son of William Henry Gale and Beatrice Maud Sedgemore/Sedgmore). Harold was born in Plymouth, Devon, England, to an English father, from Plymouth, and a Scottish mother. William was the son of William Henry Creber Gale and Elizabeth Ann Jasper, who was Cornish. Beatrice was the daughter of Arthur Edward Sedgmore.

Rachel’s maternal grandmother was Eileen Maude Bell (the daughter of Andrew Harvey Bell and Josephine Ethel Foote). Eileen was born in Pincher Creek, Alberta. Andrew was the son of William Thomas Bell, who was of English descent, and of Mary Ann Laing, whose parents were Scottish. Josephine was the daughter of William Alexander Foote and Carmina/Carmin Maude/Maud McDonald.

Genealogy of Rachel McAdams (focusing on her father’s side) – http://humphrysfamilytree.com