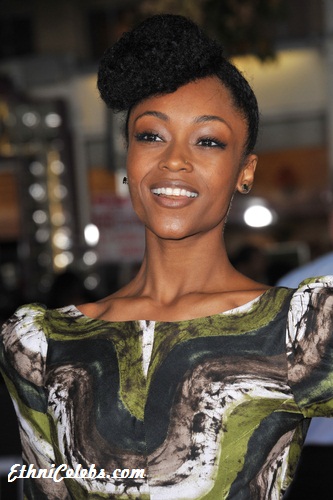 Yaya DaCosta is an American actress and model. She was the runner-up in Cycle 3 of America’s Next Top Model, and has featured in the films Tron: Legacy, The Nice Guys, and Whitney, and on the series Ugly Betty and Chicago Med, among other works.

Yaya is the daughter of Orundun DaCosta and Carl Awolowo Johnson. She has a sister, Djassi, and two brothers, Mamadou and Djani. Her family is pictured here. YaYa was raised in Harlem. She has a son with her former partner, independent film producer and director Joshua Bee Alafia. YaYa is a first cousin, once removed, of actor, writer, artist, and child advocate Roscoe Orman. Her maternal great-grandmother, Ethel/Mariel Moore, was the sister of his mother Viola.

Her father is African-American. Her mother is of one half African-Montserratian, one quarter African-Brazilian, and one quarter African-American, descent. YaYa is sometimes described as also having Irish and Cherokee Native American ancestry. It is not clear if this Irish or Native American ancestry has been verified/documented.

My mom’s dad is Brazilian, and that’s the aspect of my heritage I identify with most because I grew up around my Brazilian cousins, speaking Portuguese and going to capoeira rodas.

Yaya’s paternal grandfather likely was named Carl A. Johnson. Carl was born in Washington, D.C., and was African-American.