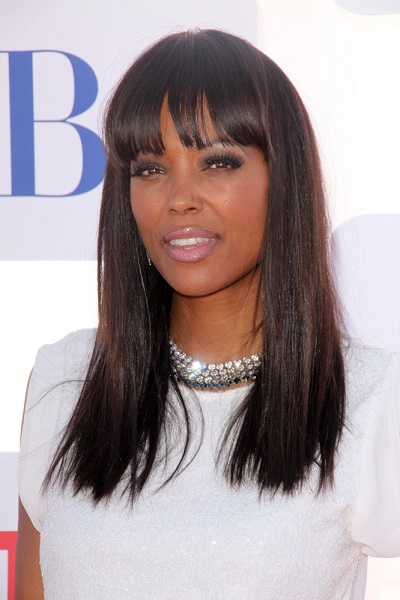 Aisha Tyler is an American actress, comedian, director, and talk show host. She is known for her roles on the series Friends, Criminal Minds, and CSI: Crime Scene Investigation, and in the films Death Sentence and Friendsgiving, among many other works.

Aisha is the daughter of Robin, a teacher, and James Tyler, a photographer. The family briefly lived in Ethiopia, and on an ashram in Oakland, California.

Aisha’s maternal grandfather was Eugene Chandler Gregory (the son of Thomas Montgomery Gregory and Hugh Ella “Huella” Hancock). Eugene was born in Washington, D.C. Thomas graduated from Harvard in 1910, as one of the few black students. He was a dramatist, educator, activist, and social philosopher, who founded The Howard Players, an African-American theatre troupe. Thomas was the son of James Monroe Gregory, a Professor of Latin and Dean at Howard University, and advocate of black education, whose grandparents were free blacks; and of Fannie Emma Hagan. Aisha’s great-grandmother Hugh was the daughter of Hugh Berry Hancock and Susie E. James.

Aisha’s great-great-grandmother Fannie Hagan’s mother, Margaret A. Mahammitt, was said to be the daughter of Jeremiah/Ali Mahomet, from Madagascar.

Aisha’s episode of Who Do You Think You Are? (2016) uncovered that her great-great-grandfather Hugh Hancock, who was mixed race, was the son of John Hancock, a Democratic Party politician and judge, who was a member of the Texas House of Representatives (1860-1861), and a Member of the U.S. House of Representatives from Texas, from March 4, 1871 to March 3, 1877, and again, from March 4, 1883 to March 3, 1885. John was white, and had English, Scottish, and Irish ancestry. Hugh was incorrectly suggested in the press as being the son of U.S. General and 1880 Democratic presidential nominee Winfield Scott Hancock, during the election.

Sources: Genealogies of Aisha Tyler (focusing on her mother’s side) – http://www.geni.com
http://www.wikitree.com