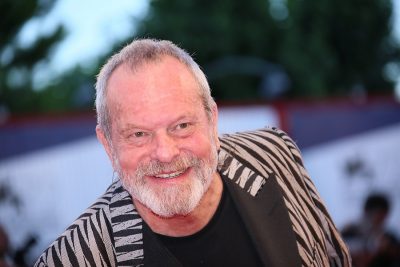 Gilliam in 2015, photo by Denis Makarenko/Bigstock.com

Terry Gilliam is an American-British film director, screenwriter, animator, actor, and comedian. Among his films as director are Brazil, Time Bandits, The Fisher King, The Adventures of Baron Munchausen, and 12 Monkeys. He is a member of the comedy troupe Monty Python, along with Graham Chapman, John Cleese, Eric Idle, Terry Jones, and Michael Palin.

Terry is the son of Beatrice and James Hall Gilliam, who was a travelling salesman and carpenter. He was raised partly in Medicine Lake, Minnesota, and then Panorama City, Los Angeles. He moved to England in the late 1960s, and is now a U.K. citizen. He has considerable Colonial American ancestry, in both Massachusetts and Virginia.

Terry is married to British makeup and costume designer Maggie Weston, with whom he has three children.

Terry’s paternal grandfather was Cleveland Howard Gilliam (the son of James Harvey Gilliam and Amanda Jane Priddy). Cleveland was born in Tennessee. James was the son of Calvin Thomas Gilliam and Minerva Susan Reaves. Amanda was the daughter of George H. Priddy and Eliza Ann Knowles.

Terry’s paternal grandmother was Ruby Edna Hall (the daughter of Edmond Thomas Hall and Susan Josephine Nichols). Ruby was born in Tennessee. Edmond was the son of Addison S. Hall and Jane B. Gillespie.

Terry’s maternal grandfather was Delbert Knight Vance (the son of Judson Boardman Vance and Effie Mae Knight). Delbert was born in Illinois. Judson was the son of Peter Hay Vance and Louisa Ann Mitchel. Effie was the daughter of Charles Knight and Evelyn Amelia Ament.