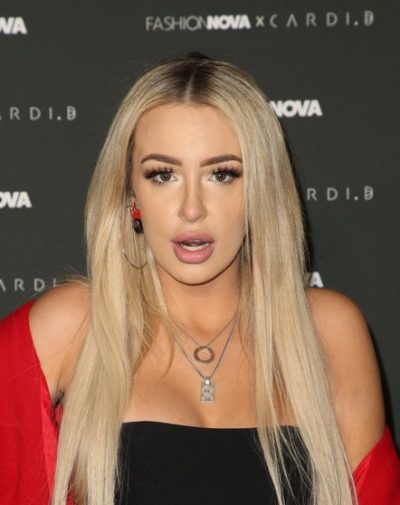 Tana Mongeau is an American internet personality, musician, and model. She is known for her “storytime” videos.

Tana’s paternal grandfather is Richard John Grilz (the son of Mathias Grilz and Mary Ann Tschida). Mathias was born in Tarvis, Austria, today Tarvisio, Italy, and was the son of Johan Grilz/Grilc, who was born in Nesselthal, near Weissenfels, today Fusine in Valromana; and of Theresia Hasch, who was born in Greuth, through Tarvis and Weissenfels. They were of Gottschee German descent. Tana’s great-grandmother Mary Ann was born in Hungary, likely in Sopronbánfalva, and was-German speaking. The surname Mongeau likely is from a step-grandfather.

Tana’s maternal grandfather was Richard Wayne Weir (the son of Jesse Thomas Weir and Alma Annie Morris). Richard was born in Texas. Jesse was the son of John Richard Weir and Laura Elizabeth Neel. Alma was the daughter of John S. Morris and Amelia F.

Tana’s maternal grandmother was Carolyn Briery (the daughter of George Gardner Briery and Effie Mae Graves). George was the son of Warren Steven Briery and Rose Annie Byrd. Effie was the daughter of Perry Lee Graves and Lucinda Capitola Platt.