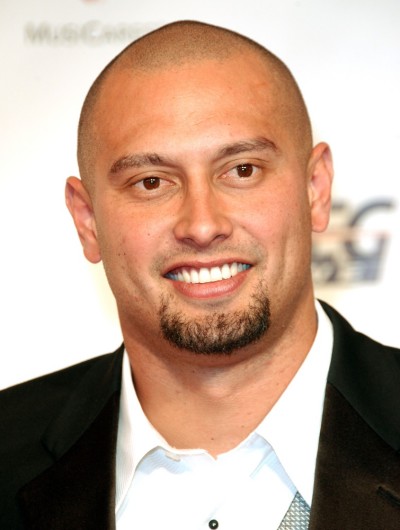 Victorino in 2009, photo by Prphotos.com

Shane Victorino is an American professional baseball player. He is nicknamed “The Flyin’ Hawaiian.”

Shane is the son of Joycelyn and Michael Victorino. His father is of Portuguese descent. His mother is of Native Hawaiian, Okinawan Japanese, Chinese, and English ancestry.

In an interview with The Philadelphia Inquirer in 2011, he stated:

I’m Portuguese, Hawaiian, Japanese, and Chinese. My name is really Victorine, which is Portuguese. My great-, great-grandpa, when he was in the war, they spelled his name with an O at the end instead of an E, and it became Victorino.

Shane’s paternal grandfather was William Farias Victorino (the son of Joseph Victorino and Melinda Ermelinda Farias). Joseph and Melinda were born in Hawaii, and all of their own parents were Portuguese.

Shane’s paternal grandmother was Irene Edna Cambra (the daughter of Manuel Cambra and Marian S. Mathias). Irene was born in Paia, Hawaii. Manuel and Marian were born in Hawaii, and all of their own parents were also Portuguese.