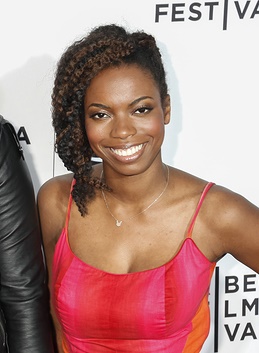 Zamata in 2015, photo by vonora/Bigstock.com

Sasheer Zamata is an American actress and comedian. She was a cast member on the show Saturday Night Live.

Sasheer was born in Okinawa, Japan, to American parents, who are African-American. Her family traveled often due to her father’s military career. She has lived in many U.S. places, including Indianapolis, Indiana.

She has said that she was named Sahsheer after an alien flower-like crystal, the Sahsheer, in the Star Trek episode “By Any Other Name.”

Sasheer’s maternal grandmother was Maurice LaBlance Mahon (the daughter of Leroy Washington Stenthouse, later Mahon, and of Caroline Angeline Hobson). Maurice was born in Arkansas. Leroy was the son of Henry Stenthouse/Stenhouse and Vina. He founded the small town, Fargo, Arkansas.

Source: Genealogy of Sasheer Zamata (focusing on her mother’s side) – https://www.geni.com