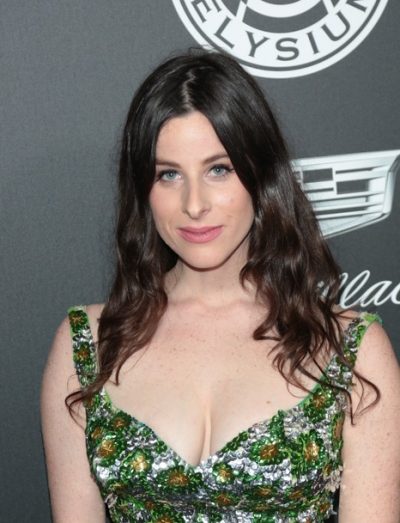 Spielberg in 2018, pic by prphotos

Sasha Spielberg is an American actress and musician. In her music work, she is known as Buzzy Lee.

She is the daughter of director, producer, and screenwriter Steven Spielberg and actress Kate Capshaw. Her half-sister is actress Jessica Capshaw (born Jessica Brooke Capshaw). Her father is from an Ashkenazi Jewish family. Her mother is of English and some German descent. She converted to Orthodox Judaism.

Sasha’s paternal grandfather was Arnold Meyer Spielberg (the son of Shmuel/Samuel C. Spielberg and Rebecca Chechick/Chichik). Arnold was born in Ohio, to Ukrainian Jewish parents. He was a prominent electrical engineer. Shmuel was the son of Mayer/Meyer Pesach Spielberg and Bertha/Bessie Sandelman/Sandleman. Rebecca was the daughter of Nachman/Nathan Morduhov Chechik and Reitzl/Rachel Nigonova Gendler/Hendler.

Sasha’s maternal grandfather was Edwin Leon Nail (the son of Myron Hooper Nail and Bertha Bessie Bergman). Edwin was born in Illinois. Myron was the son of Richard Henry Nail and Lucy Mary Hooper. Bertha was the daughter of Louis Bergman, who was German, and of Annie.

Sasha’s maternal grandmother was Beverley Sue Simon (the daughter of Eldon W. Simon and Evelyn Beryl Roberts). Beverley was born in Illinois. Eldon was the son of George Cleveland Simon and Anna B. Seaborn. Evelyn was the daughter of Myron Eugene Roberts and Pearl Ethel Pugh.

Genealogy of Sasha Spielberg (focusing on her mother’s side) – http://freepages.genealogy.rootsweb.ancestry.com

Genealogy of Sasha’s mother (focusing on her own father’s side) – http://worldconnect.rootsweb.ancestry.com