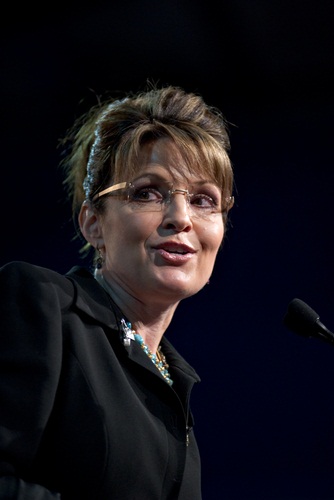 She was the Republican Party’s nominee for Vice President of the United States in 2008.

Sarah’s paternal grandfather was Charles Francis Heath (the son of Charles R. Heath and Alice Adaline/Adeline Oriel). Sarah’s grandfather Charles was born in Illinois. Sarah’s great-grandfather Charles was of Colonial American descent, and was the son of James W. Heath and Alma Miranda Rhodes. Alice was the daughter of Francis H. Oriel, who was born in Canada, to English parents, and of Ellen Anna Dee, who was Irish.

Sarah’s paternal grandmother was Nellie Marie Brandt (the daughter of Henry Charles Brandt and May/Mary Belle Ruddock). Nellie was born in California. Henry was the son of Charles C. Brandt, who was born in Mecklenburg, Germany, and of Maria/Meriah Criss. May was the daughter of Thomas S. Ruddock and Maria Nancy Newell. She was of mostly Colonial American (English) descent, though Thomas’ grandfather was Scottish.

Sarah’s maternal grandmother was Helen Louise Gower (the daughter of James Carl Gower and Cora Godfrey Strong). Helen was born in Wisconsin, and was of mostly Colonial American (English), and one quarter German, descent. James was the son of Arthur Collins Gower and Mary/Maria Schmolz, who was born in Frankfurt, Germany. Cora was the daughter of Homer Curtiss/Curtis Strong and Augusta Lodema “Gussie” Godfrey.

Various inaccurate (deliberately fanciful) genealogies on the internet state that Sarah is of mostly Ashkenazi Jewish ancestry. This is not accurate.

Notes on some of Sarah’s distant relatives – http://www.suite101.com