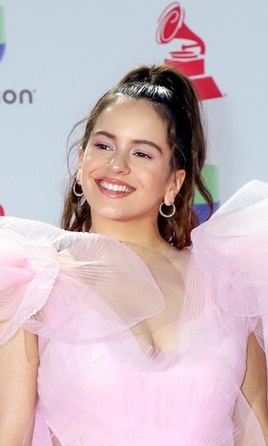 Rosalía is a Spanish singer, songwriter, and actress. Known for her modern interpretation of flamenco music, Rosalía crossed the Spanish boundaries after receiving praise from international influencers and after several collaborations with artists.

Rosalía is the daughter of María Pilar Tobella Aguilera and José Manuel Vila. Her father was born in Cudillero, Asturias, the son of a Galician father and of a Spanish mother, from Huelva, Andalusia. Her mother is of Catalan and Spanish descent, and Rosalía grew up speaking Catalan and Spanish. One of her great-grandfathers was Cuban.

Rosalia’s maternal grandmother is named Rosalia (or Rosalía in Spanish) Aguilera Torres (the daughter of Jaume Aguilera, and of a mother surnamed Torres).